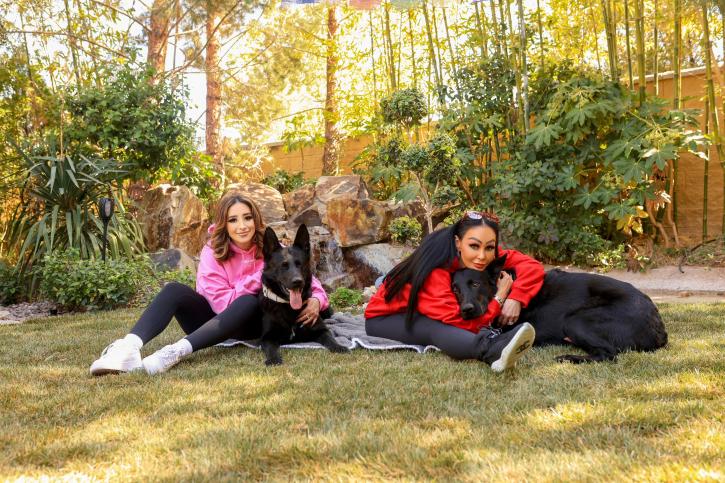 A private jet circles over the high desert in Los Angeles County and lands on a locally-operated runway. The passenger is a businesswoman, philanthropist, and author, Lana Fuchs, on a personal jaunt from her home in Las Vegas to the community of Agua Dulce, about an hour’s drive northeast of Los Angeles. She’s a client of and friends with a husband-and-wife duo who are known globally for their expertise in pure bloodline German Shepherds. Her Shepherd, Lucifer Morning Star Fuchs, was bred and trained by Michael Kempkes and his wife, Jeannette, who have drawn on a lifetime of love to develop Kempkes Executive K-9s and Wustenberger-Land. They select, train, and acclimate pure bloodline German Shepherds for the most elite families in California, Las Vegas, and throughout the United States. But it’s not an indulgent luxury. The families have special requirements for personal protection and companionship, and an elite German Shepherd will best meet their needs. The delicate nature of matching the proper dog with the right family is based on experiences that Michael and Jeannette have developed during their lifetimes.


A Boy and His Dogs

Michael’s journey of working with prized German Shepherds began as a nine-year-old boy in Borken, Germany, in the northwest and on the border with the Netherlands. He learned a sport that’s as unique to Germany as baseball is to the United States: Schutzhund — turning work into a sport. Schutzhund was developed in the early 1900s to test the abilities to work German Shepherds in tracking, obedience, and protection skills. Today, a variety of breeds participate in the sport but Schutzhund remains vital to training the most elite German Shepherds used in critical areas like police work and personal protection.

In the world of pure bloodline German Shepherds, many trainers and breeders will look at them as either working dogs or show dogs. But not Michael. “I don’t limit what a dog can do based on how it’s perceived,” he says. “Instead, I want it to be the best of its class and see what I can do to cultivate the dog’s fullest potential. I don’t say, ‘Oh, this is a show dog so it can’t do what a working dog can do.’ Let’s see.” Michael relies on an innate understanding to begin training each dog individually and bring out their best. He’ll grasp what seems intangible to others but has meaning to him, so he can read the dog and develop a way to guide it in learning and achieving what it can truly do.

Over the years, Michael developed a network of friends and collaborated when necessary to share lessons and gain feedback. He believes in guiding elite dogs and not just demanding that they follow orders. It’s the way coaches in any sport work with high-performance athletes who have a natural talent and follow a strategy to bring out their best.

Pure bloodline German Shepherds are truly unique. “You can’t just make a dog elite. The temperament is crucial,” says Michael. “They’re special because of how they were raised as a puppy and how they’re trained for two years, at least. It’s a long process which is why the dogs become so valuable.” The best dogs are physically attractive with aesthetically pleasing lines and they have a temperament that allows them to push limits and seek challenges. All of their positive traits must be aligned. As Michael entered his teen years and began working, he found employment as a butcher. Training the dogs in the local Schutzhund club was for fun on the side — until he became employed with the German government and trained dogs for the police. “I’ve always been open to learning, too, and we had lots of competitions. Like guard dogs for the airports. There were five competitions and in one year I won all five with the same dog. It had never happened before and it’s never happened after.” Michael uses treats of meat and toys like balls to encourage the dogs in their training, but he also lets a dog have fun. “Training can include jumping a one-meter hurdle and jumping over an A-frame, but I don’t make a dog do the whole routine. I’ll break it up into parts and let them do one thing like just jump over the frame for a while so they learn the height. I don’t stress them out.” His approach lets dogs thrive in high-stress situations where they remain calm — even if gunfire is popping around them.

The leading society for pure bloodline German Shepherds, the German SV, recognized Michael with a lifetime achievement award for his work in titling hundreds of dogs and winning international competitions. Specialized Family-Dog Relationships Michael continues competing at the world championships in Germany and, on occasion, will compete in the U.S. to help a dog prepare for the world championships. He and Jeannette have spent the past decade working with clients like Lana Fuchs who enjoy the security and companionship of an elite dog. Other clients include leaders of globally recognized corporations, A-list performers, and business people living in upscale communities around Los Angeles. Michael and Jeannette take a highly personalized, white-glove approach to match a family with a dog that has the right temperament and is the best fit. “We’ll assess their needs by asking who is out working, who stays home during the day, if anyone, the ages of their children, and the size of their property. It’s more important when we’re placing an older dog. We’ll get calls saying, ‘I need a really good protection dog.’ We’ll ask, ‘Why do you need a protection dog?’” Each dog is different and can serve different purposes, even if they’re a pure bloodline Shepherd. “We’ll learn if a family wants a dog who is always on alert and ready to respond, or if the simple presence of a German Shepherd is enough.”

Michael and Jeannette use the information to travel to Germany where they also keep a home. The dogs are closely watched to see if they have any genetic defects, including X-rays of the spine and elbows. Their line is checked to see if relatives in previous generations were also given a clean bill of health. Once the proper dog is chosen, then they travel with the dog back to their ranch where the initial training takes place. When it comes time to place the dog, Michael and Jeannette do an initial visit with the dog at the family’s home to walk the dog through the home and around the property. Sometimes they do it twice to acclimate it before having it stay permanently. When placement occurs, the couple stays nearby to ensure that the process occurs smoothly. After the dog has been with the family for 48 hours, Michael then works with the dog and family on the final steps in the transferring process. Michael remains available for follow-up questions or concerns that a client may have. “Our success is based on the connection that the dog enjoys with the family,” says Michael. Going the Extra Mile — with the Families and the Dogs Michael and Jeannette ensure the dogs are completely used to their environment and the lifestyle of their new families, like flying in their private jets. “It was comforting that [Michael] flew on the plane with us to make sure Lucifer was ready for his first flight and also get acclimated to my other house,” says Lana. “I fly often so it’s important that flying be easy for him.”

Lana also says the Kempkes were readily available by phone to advise on important details like “nutrition, natural paw moisturizers, and everything else. I never felt like I was alone and especially in the beginning, that support system was my security blanket.” Lana’s philanthropic work includes working with nonprofit organizations for the betterment of animals. It’s that concern for the well-being of German Shepherds that brought Michael and Jeannette together. A Life with Elite German Shepherds Michael had been traveling to the United States to train and show dogs when he worked with a breeder, Bill Fliescher, to import an elite German Shepherd into Texas for the person who owned the tequila brand Jose Cuervo. During a party at the ranch, Michael met Jeannette who in 1992 was one of the first few Americans to import a pure bloodline German Shepherd, a top son of the famous Enzo von der Burg Aliso, out of the great Quantum von Arminius lines. Matching a family and dog is a specialized process and one that Michael and Jeannette know quite well from a lifetime of training, showing, and placing the world’s most elite dogs.