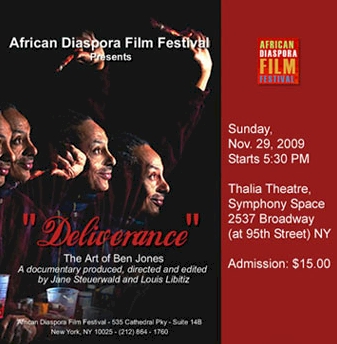 This documentary video accompanies the major retrospective of critically-acclaimed artist Ben Jones at the Jersey City Museum, 2008 through 2009, featuring a complete survey of the artist's work, dating from the mid-1970's to the most recent paintings. This film was produced, directed, and edited by Jane Steuerwald and Louis Libitz, 2008, 25min, documentary in English. The Deliverance book has a collection of essays by curator, Edward Spriggs; poet laureate, Amiri Baraka; and curator, Kelli Jones accompanies this exhibition and the book is on sale at Amazon.com.

Deliverance explores various aspects of Jones' body of work, and delves further into his close relationship to religions of the African diaspora, travel, family, teaching, politics and spirituality. An Artist Panel proceeds this screening at 7 PM, followed by a closing cocktail reception. The Thalia Cinema Society is located at 2537 Broadway, New York, NY.

For over four decades, Jones’ multimedia installations have reflected his travels and research in Africa, Europe, South America, United States and the Caribbean. Jones has made over fifty cultural exchange visits to Cuba since the 1970s. The Granma International of Havana, Cuba, regards Jones’ "as one of the most important African-American artists of his generation." Jones’ work combines a classical portrayal of African art/culture represented by the African Diaspora and the African-American experience. Jones states, ...I want my work to be for everyone. Once we realize that we are not only one world, but apart of an expanding universe, we begin to express the joy of creation and a love for all people.

Ben Jones received an MFA from Pratt University (Brooklyn, NY), MA from New York University (New York, NY) and BFA from Paterson University (Wayne, NJ). Jones’ work has been exhibited in countless public and private collections across the United States, Cuba, Spain, Great Britain, Brazil and Japan to include the Museum of Modern Art (New York, NY), Studio Museum of Harlem (New York, NY) and Museo Nacional de Bellas Artes (Havana, Cuba) to name a few. He has received numerous grants and awards including two National Endowment for the Arts grants (2007 and 1974-75), The Puffin Foundation grant (2005), and The Joan Mitchell Foundation grant (2002) and other grants.

Jane Steuerwald received an MFA from Bard College (New York, NY), and BFA from Syracuse University (Syracuse, NY). Her film and video has been shown in art venues and festivals including: Museum of Modern Art (New York, NY), Black Maria Film and Video Festival (Jersey City, NJ), the Asian Cinevision International Film Festival (New York, NY), Atlanta Film and Video Festival (Atlanta, GA), and Millennium Film (New York, NY) among many others. She has won numerous awards, fellowships and grants including the Artist Fellowships from NJ State Council on the Arts (1991, 2004), The Puffin Foundation Grant (2008), Lightworks (1981), and A TRIBUTE, winner of the SONY/AFI video competition and other grants.

Louis Libitz received an MFA from Syracuse University (Syracuse, NY), and BFA from New Jersey City University (Jersey City, NJ). His film and video has been shown in solo and group exhibitions in New York, NY, Jersey City, NJ, Samothraki, Greece, Santiago, Chile and Lima, Peru to name a few. He has won numerous awards to include the Dorothea Ilgen Shaffer Fellowship Award (2007), Geraldine R. Dodge Fellowship (2005) and Dr. Joseph Drew Award for Excellence in Media Production (2003) among many others.
Visit: www.benfjones.net and http://www.nyadff.org
Follow Ben Jones on Facebook!

View all posts by Alaina Simone IncIs this your business? Claim this post.Contact Alaina Simone Inc
goodideazs, LLC is not affiliated with the authors of this post nor is it responsible for its content, the accuracy and authenticity of which should be independently verified.